Will you marry me?

I’ve reached one milestone by graduating today. Let’s reach another one. Will you marry me?

On March 6, 2020 John followed in his late father’s footsteps, and graduated from the City University of New York Academy as a Peace Officer. Going through the academy John had become close with other Officers who would eventually help him plan one of the most important days of his (and my) life. After the graduation ceremony, everyone had gathered in the atrium of Fridamin Hall at Queens College. John had called me over to where he was standing so we could take photos with each other. While we were taking our normal photos, a crowd started to surround us but we thought nothing of it. Little did I know that as we were having our photo taken, John’s friends were walking out behind us wearing shirts that when put together (in the correct order) read “Will You Marry Me”. After we were done taking photos, my friend Ashley ran over to me to show me the photo she had taken, and at the same moment I saw the photo, I had finally noticed the officers lined up with their shirts. I looked back over at John, who was down on one knee. Because I was in complete shock, I couldn’t tell you what John had said but luckily John remembers. While down on one knee John looked at me and said, “I’ve reached one milestone by graduating today. Let’s reach another one. Will you marry me?” Speechless, I nodded yes and with that after seven wonderful years of dating we were officially ENGAGED! 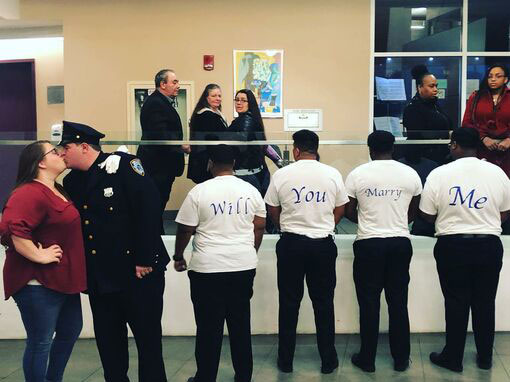 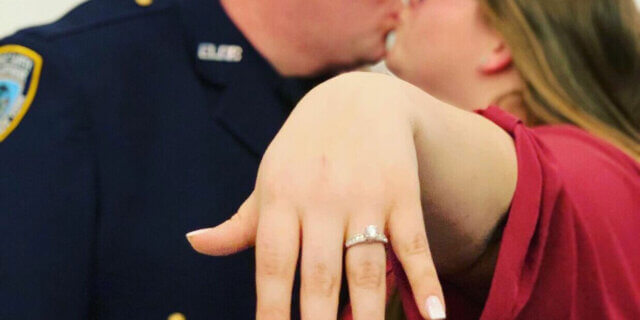 Written by Brides of Long Island