How to Handle an Empty-Handed Guest

Despite traditional expectations and social etiquette, some of those who attend your wedding may not come with a gift in tow. Here is how to handle and empty-handed guest.

We get it – you would never say you’re getting married solely for the gifts you’ll receive, but it’s a big part of the wedding experience. While the social norms of appropriate gift-giving do vary from region to region, it’s safe to say that giving a present to the new couple is a widely accepted expectation of wedding attendance.

But the fact of the matter is, at least one of your guests will show up to your wedding empty-handed. We can almost guarantee it. It may be someone you know is going through a hard time financially, or it may be someone you’d never expect to skimp out on the custom.

While the lack of a gift may seem like a personal offense, we promise you it isn’t. Here’s how to handle an empty-handed guest.

Expect it to occur

Remember when we said that someone will show up without a gift? Now you know, so you can be prepared. Don’t drive yourself crazy trying to figure out who it will be or what their reasonings are, but just know that there is a possibility that you won’t get a gift from everyone who comes. Sometimes the shock of not receiving a gift creates a charged emotional response, and if you can mentally and emotionally prepare yourself for the possibility now, chances are you’ll be in a much more rational place to deal with it when it happens.

We put so much effort into our weddings. Time spent agonizing over color swatches and flower choices, money spent on the nicest venues and lavish package upgrades, and energy spent trying to find perfect entrance songs and hashtags. After so much work, it may be easy to take it personally when a guest shows up without a gift. And yes – attending what is probably the most expensive party you’ve ever thrown while ignoring cultural expectations is rude. But certain specific situations notwithstanding, it isn’t personal. The lack of a gift isn’t a slight to you and your new spouse, or a commentary on the value of your wedding, or an indication of your importance in their lives. More likely than not, it is more about the guest than it is about you.

Know that you don’t know

Unless you have access to every one of your guests’ bank accounts, it’s important to realize one thing: you do not know anyone’s financial situation. Newly-purchased homes or cars, vacation pictures posted to social media, or coveted designer handbags do not mean that a guest is rolling in money and has the means for their lifestyle.

If a guest has shown up to your wedding without a gift, it might be useful to think about certain situations they may be going through – if they just bought a house, they could have drained their accounts for the purchase and are now living paycheck to paycheck. If they went on an incredible vacation or sprung for an expensive purse, it could have been something they’d been saving up for, for a long time. If they’re a member of your bridal party – they could have spent so much on your bridal shower, bachelorette party, bridesmaids dress, or hair and makeup that they just don’t have enough for a gift AND rent at this time.

Try to put yourself in someone else’s shoes, and make peace with the fact that you really don’t know your guests’ finances. 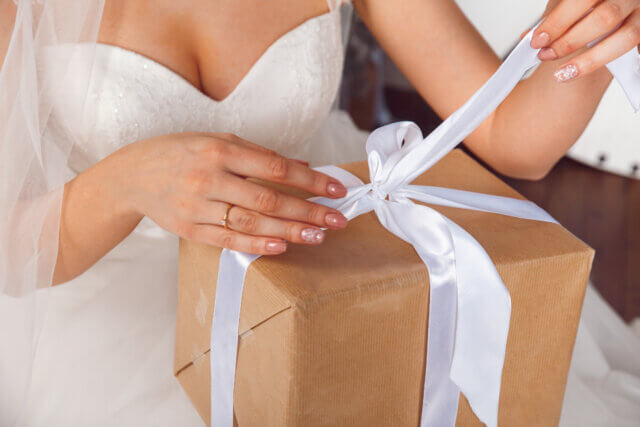 Remember that they have a year

Social etiquette deems gift-giving necessary, but social etiquette ALSO deems that guests have a year to give you something. So while your card box may be missing a gift now, you could receive it soon.

We mentioned before that it may surprise you when certain guests show up empty-handed. In the vast majority of cases, we’d suggest NOT reaching out to the person and asking why. But if the lack of a gift seems really strange, you can approach them gently. It could be that they simply forgot, or it could be something nefarious (like someone has snatched gifts from your wedding).

If you do decide to reach out, phrase it in a way that takes the impetus off of them – “we’re missing a few gifts from guests that dropped something off, and we’re trying to figure out what happened to them. Did you bring a gift to the wedding? We only ask because we’re trying to get an idea of what exactly we’re missing.”

Thank them for coming

You may be tempted to leave an empty-handed guest off of your thank you card list, but trust us – you shouldn’t. Write your guest a short message, thanking them for celebrating the day with you. Even if they didn’t give you a gift, they still spent time (and money) to attend.

You may also be tempted to “return the favor” when it’s time to attend their weddings, but this isn’t a good idea either. Like we mentioned – you never know what someone is going through, and your wedding may have happened at a really bad time in their lives.

When you’re on the guest side of things, give the type of gift you’d normally give. If you really have a problem with that idea, then don’t attend their wedding.

Remember what weddings are really about