Mrs. December: No Dancing? Cut Guest List? Nothing Stopped This BOLI from Getting Married in 2020.

By Christine McGrathDecember 6, 2021No Comments 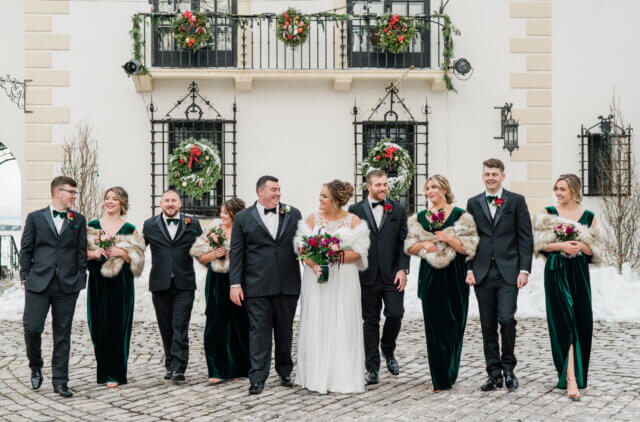 In Brides of Long Island’s Monthly “Mrs.” series, we profile some of our members’ unforgettable weddings. This month, we spoke with BOLI Nicole Zakian about how nothing would stop her from getting married in 2020!

As with many brides who got engaged in 2019, Nicole Zakian had no idea what 2020 had in store for her. While the weeks leading up to her December 2020 wedding were very stressful, nothing was going to stop her from marrying her husband Matt in the year 2020. Pandemic restrictions? Nicole adjusted not only her timeline, but her guest list! A blizzard two days before her wedding day? Her guests made it! This BOLI essentially told COVID to F off as she celebrated the best day ever.

When Nicole met Matt in college 10 years ago, she was from upstate New York, and he lived on Long Island. She had no intention of ever moving to Long Island. But her heart had other plans. She and Matt had a long-distance romance after college, but after Matt got into the New York City Police Department, Nicole made the move to Long Island five years ago. They got engaged in November of 2019 at her parents’ house upstate, and immediately started planning their wedding, as Nicole had it in her head that she wanted to be married in 2020. 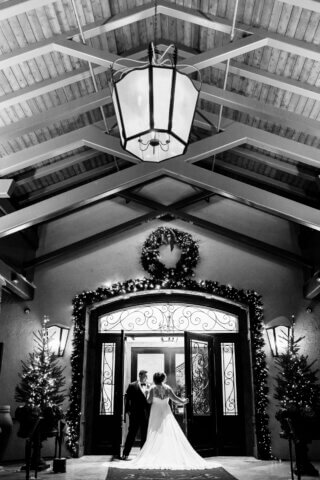 At first, Nicole was set on having a rustic-barn wedding upstate. But, after doing some research, and joining BOLI, Nicole realized Long Island was where she wanted to have her wedding. “These venues [on Long Island] basically have the whole packages with everything included,” says Nicole. Larkfield was a venue that had not a single bad review on BOLI, so that’s where Nicole and Matt headed first to tour. “We loved the grounds. The Christmas tree was up when we saw it. I was in love with the decorations,” says Nicole. “We’re also huge food people, so cocktail hour is a big requirement for us.” With all of the rave reviews on BOLI about the cocktail hour and food, that sealed the deal, and they booked the next day for Dec. 19, 2020.

Once the venue was set, Nicole set out to find her other vendors. Next up for her was to book Ashley Glazer for her hair. Even before she had her trial later in 2020, Nicole says she could tell that Ashley Glazer is a master in her craft. Soon after booking Ashley Glazer, the other vendors fell into place – most of them booked before COVID shut everything down in March. She did book her videographer during COVID, as she originally was on the fence about getting video but COVID changed her mind. She says Will Delisi of Two Soul Wedding Films was reasonable and did not disappoint. “He approached me with an idea of a storyline versus a regular video. They came over to our house four days before the wedding and interviewed us,” says Nicole. “They incorporated that into the wedding video. It’s a family keepsake now that I’m excited to show our future kids.”

While many 2020 brides chose to reschedule their weddings, Nicole says she was stuck in her ways to have a 2020 wedding. She says that even if she had wanted to, many of the Larkfield brides before her had rescheduled to most dates in 2021. She adds that she was obsessed with her vendors and didn’t want to lose any of them from rebooking.

“So we basically just said, as long as we’re still able, we’re going to have this wedding.”

Things didn’t get really stressful until about a month before the wedding. Nicole would watch the news and listen to former Gov. Cuomo threaten to shut down everything ahead of the holidays – and her upcoming wedding. And while there was no dancing and her guests had to wear masks, the two biggest changes she had to make were moving up her timeline and cutting her guest list – from 200 to 50!

Originally, her wedding was supposed to start a 7 p.m., but with the restriction of weddings ending at 10 p.m., Nicole had to move up her entire day, including her first look at the Vanderbilt. The upside was there were no other weddings that day at Larkfield, so she could arrive whenever she wanted. And even though Larkfield wanted her to postpone, Nicole stood her ground and kept her date.

On top of the stress of the COVID restrictions, two days before her wedding there was a blizzard on Long Island. She was worried that her parents and the rest of the out-of-town guests wouldn’t be able to make it. But everyone did.

MORE: See how COVID-19 affect other Brides of Long Island

Going With the Flow

Nicole says because of the snow, the grounds at the Vanderbilt were wet and muddy. During her first look, “my dress was actually covered in mud,” says Nicole. On the limo ride over to Larkfield, her photographer, Alessandra Park, was assuring her that it wasn’t a big deal. “I’ll never forget the maitre d’s mouth dropped as soon as she saw my dress,” says Nicole. But her two bridal attendants whisked her to a bathroom, handwashed the bottom of her dress in the sink and put it under the blow dryer. By the time the ceremony started, “People had no idea that it was covered in mud less than an hour before,” says Nicole.

Nicole was originally worried there’d be nothing to do during the reception and her guests would be bored without dancing, but she says there really was never a lull at any point throughout the night. Her MC played the shoe game with guests, and she got a photo booth at the last minute. In addition, Nicole created program favors for her guests that contained crossword puzzles and fun trivia about her and Matt. She adds that they were able to do their first dance, and if the DJ played a song that people started to dance to, the DJ let them dance socially distant, of course, and then tastefully asked people to sit down when the song was over. “They didn’t make it out to be ‘no you’re not allowed to do that at all,’” says Nicole. “They really did a great job managing it so that everyone was safe and having a good time.”

And while there was certainly family drama when Nicole and Matt had to cut their guest list from 200 to 50, she says most people understood and any drama dissipated after the wedding. 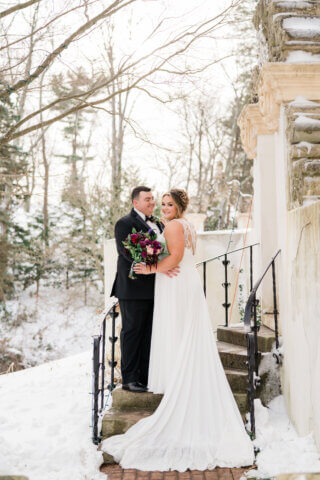 A Little Something Special

Nicole’s favorite part of the planning, though, was the DIY favors. Not only did she create the programs for her guests, but she also made customized hotel welcome bags and all of the signage. She is most proud of the ornaments she created as favors. She used wood from her parents’ property upstate and turned them into Christmas ornaments. “On one side it has the initials M & N and our wedding date of 2020,” says Nicole. “On the back is a picture of New York and a heart where Long Island is.” She says the ornaments meant a lot to her and Matt, as it symbolized the joining of their families.

MORE: Read more about DIY ideas for your wedding

As for her theme, even though Nicole is obsessed with Christmas, she didn’t want a full Christmas wedding. “I wanted more of a winter glam kind of feel with hints of Christmas in it.” She took to Pinterest and found what she was looking for – bright, bold flowers with hints of green, green velvet bridesmaid dresses and jewelry with gold or rose gold accents.

The vendor she couldn’t live without? “Alessandra and her husband Charlie, the photographers,” she says. When she had to change her entire timeline, Nicole says she just couldn’t get it right. She leaned on Alessandra to help her figure it out. “She was my calming force basically leading up to it and the whole wedding.” And it certainly helped that when she woke up the morning after her wedding, she had photo teasers waiting in her inbox!

A moment that she won’t forget – and wasn’t expecting – was getting so emotional as she walked down the aisle. “It was just a stress reliever,” she says. 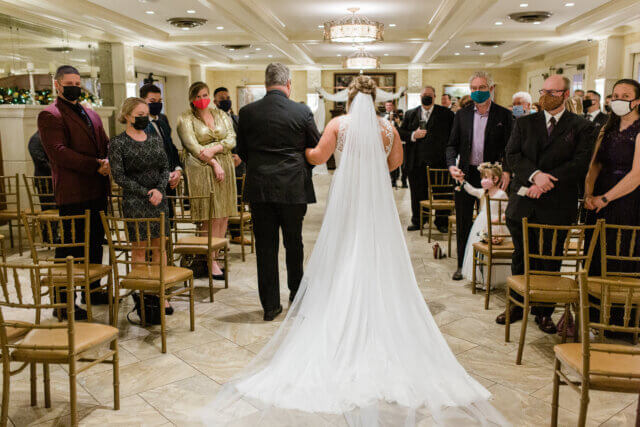 Do It Your Way

Doing it her way was Nicole’s mantra throughout the entire wedding process. From wanting velvet bridesmaid dresses to sticking to her guns and having her wedding in 2020, Nicole didn’t back down. And she wants other brides to know that’s OK! “Don’t get caught up in all of the things that you think you have to do,” urges Nicole. “If you’ve always wanted something at your wedding, then do it your way.” She adds that it’s important to keep your personality into your wedding, and not get caught up in what is trendy or what everyone else is doing. 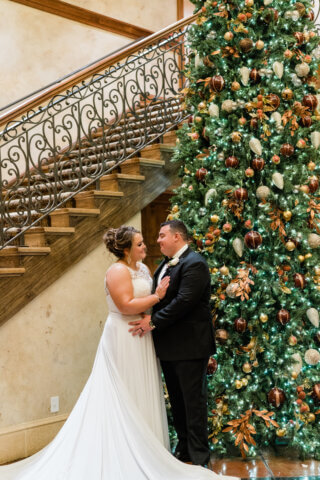 MORE: How to cut your wedding day guest list 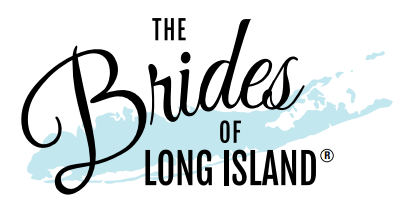