Mrs. May: The Importance of Their Wedding Date Made These BOLIs Still Say ‘I Do’ 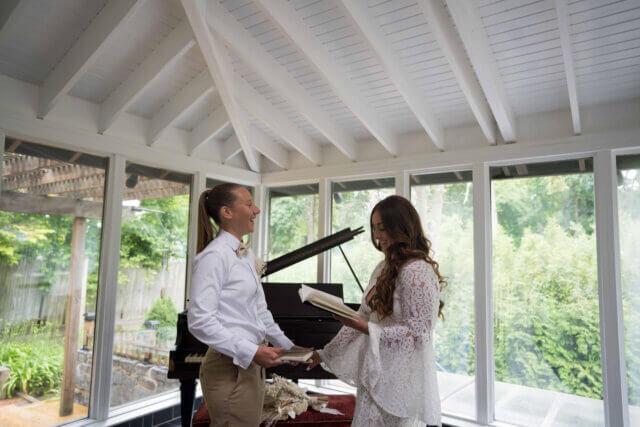 In Brides of Long Island’s Monthly “Mrs.” series, we profile some of our members’ unforgettable weddings. This month, we spoke with BOLI Erika Tracy and her wife Devin about why it was important to still have their ceremony in 2021 after postponing their full reception to 2022.

When Erika and Devin Tracy got engaged in May of 2019, they knew they wanted a two-year engagement. But like most Brides of Long Island, a pandemic was putting a damper on their plans to say I Do on July 1, 2021. These ladies knew in their hearts they wanted to still get married on that date, so they chose to have a small, intimate ceremony and dinner with a few friends and family. “It was our 10 year dating anniversary,” says Erika. “Also, it was 10 years ago that they legalized gay marriage in New York. And we thought that was really special too.”

A Match Made in College

Erika and Devin met their freshman year at SUNY New Paltz. Literally on their first day of college. Fast forward to May 2019, and Devin is surprising Erika at the Robert Moses Lighthouse with a proposal, surrounded by their friends and family. Both women love the beach, hence the beach proposal. And they incorporated some beach themes into their 2021 wedding ceremony.

In April of 2021, Erika says they didn’t know how the summer would be with the pandemic, so they decided to postpone. Erika says the Piermont, a BOLI preferred vendor, made it very easy for them to switch their date to the following year. And Erika says they got lucky when it came to vendors, as “everyone was available and it was super easy [to reschedule].”

Erika says they turned to the BOLI group a lot while planning, specifically when trying to decide if they should postpone. “It was really cool to see that people had small ceremonies for their original dates and then moved their reception,” she says. “And it was really cool to see other brides doing a ceremony and reception and feeling good about it.”

For their wedding in 2021, Erika says they used different vendors, with the exception of hair and makeup. They used Bridgette Aprea for hair and Amelia (Aimee) Molle for makeup. And Erika says the women work well with each other, and were very easy to work with. “Devin doesn’t like very feminine hairstyles. And they worked to make sure she looked and felt like herself,” Erika says. “They just understood who we were and made it really special for us.”

As they switched gears to plan the more intimate wedding for 2021, Erika and Devin did a lot of things themselves. “We did pampas grass from the beaches [for bouquets]. We cut everything. We got antique glass bottles from thrift stores.” 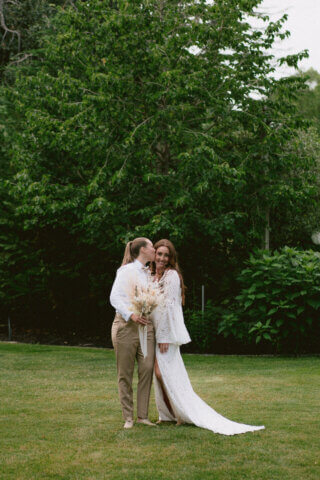 MORE: 6 reasons why rain on your wedding day can be awesome

On the big day, Erika and Devin were surrounded by their parents, grandparents and bridal party – around 30 people. Erika says their neighbor let them use their property and house in Great River for the ceremony. They had a friend officiate the short ceremony and then had dinner at the View in Oakdale, a BOLI preferred vendor. And they didn’t let the fact that it rained impact their day.

At the View, the couple had a private room in the back with an amazing view on the water. And after, Erika says they played darts at The Wharf, a dive bar nearby. “That was so fun. And I ruined the bottom of my dress and it was great,” says Erika.

Erika adds, “We were both just really grateful that we decided to get legally married when we wanted to. Because the world has been so crazy, and you never know what could happen.”

After they said I do, the women took a beach trip to Fire Island for a quick getaway. Erika says they loved spending the time together as a married couple – even if it wasn’t the honeymoon they had originally planned. They plan to visit Italy and Greece in August of this year, after their reception in July. 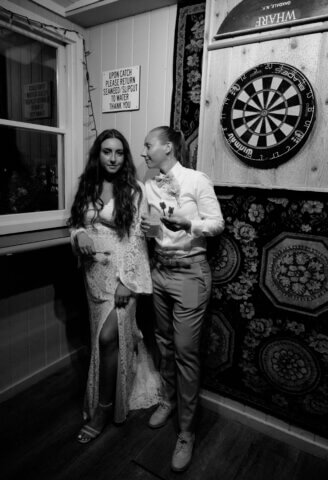 While getting married in 2021 was important to the ladies, they can not wait to celebrate with the rest of their friends and extended family this July. In fact, they both say they saved some important traditions for the wedding this year, including the Jewish tradition of stepping on the glass. “We tried to save a couple things to make this year novel and exciting,” says Erika.

Devin and Erika also kept their original suit and dress under wraps for this year. Devin is so excited to wear a custom suit from Bindle & Keep in Brooklyn as the whole process was very cool, she says. “They specialize in women’s custom suits, so they are really good,” Devin explains. “They were very helpful and explained why it’s so hard for women, more manly women, to find suits that fit them. They specialize in lesbian suits.”

What else are the ladies looking forward to? “Dancing,” says Erika. “To be able to have extended family and friends witness even a recommitment ceremony is super special. And we get to dance too.”

“Our friends that weren’t there are excited to celebrate us, as I would celebrate my friends,” says Devin. “You love people, and you want to celebrate with them.” 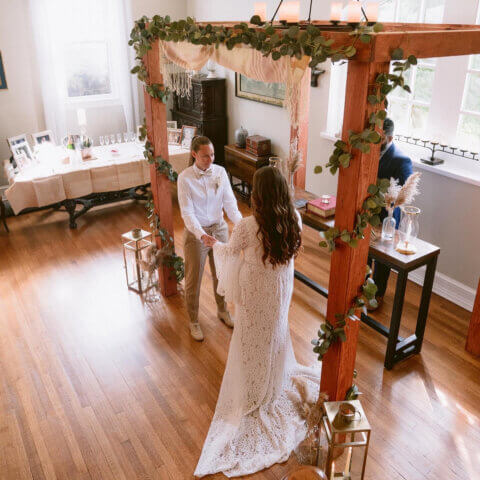 “Do What Feels Right For You”

Initially, Devin and Erika had some hesitation about having ‘two weddings.’ But in the end, they did what felt right to them. “I think there are a lot of opinions about what you should and shouldn’t do, And you just have to do what feels right for you.”

They both agree that COVID put a lot of things in perspective for them. It also allowed them to go with the flow more as they realized some things are just out of their control. “I feel like with COVID, you’re reminded that certain things are out of your control. The weather. A pandemic,” says Devin. “If you do want to do just a little ceremony and get married for yourself, that’s great. You can always do a reception later. You deserve to have a party and have all of your friends celebrate you, which some people forget.”

Another piece of advice for other brides? Don’t get caught up in the little things, says Erika. “Do what you can financially and mentally. As long as you have people who love you, the day is perfect. Those little details you stress about, they don’t even matter.”

MORE: After it was over, I realized the small stuff didn’t matter 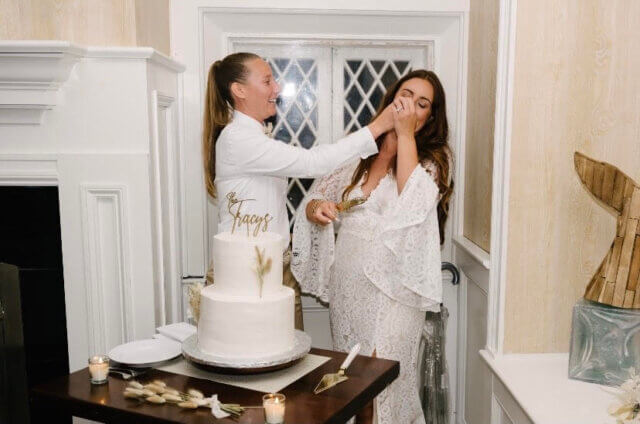