Mrs. August: A Series of Misadventures Leads This BOLI to the Perfect Wedding Night

In Brides of Long Island’s Monthly “Mrs.” series, we profile some of our members’ unforgettable weddings. This month, we spoke with Gaelle Ligondé about going with her gut on her first date with Daniel Achstatter, to all of the personal touches she added to create the perfect wedding night. 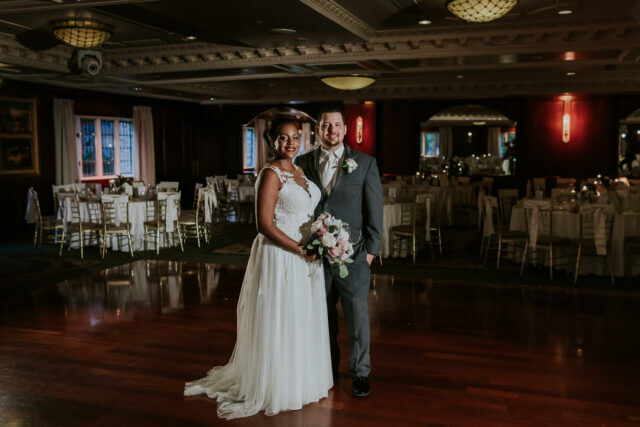 Gaelle Ligondé met her husband Daniel Achstatter on OK Cupid “when that was a thing,” she says. After speaking online, they finally met in person. And if you know Gaelle and Daniel, you will know that this first date was probably the first of many ‘misadventures,’ as she calls them, in their relationship. She explains that they met in an industrial part of Oceanside at Barrier Brewery. At the time, she says that the brewery was near a lot of warehouses and train tracks. “He didn’t really think about me meeting someone I’ve never met in a place like that.” But she says, even though she got lost, she called him for directions and the rest is history.

After eight years of dating, Gaelle says Daniel proposed in May of 2021 at the Croton Reservoir State Park. “I knew it was coming,” she says. She says she helped pick out the ring, and had a feeling when they went to the park that it was going to happen – “I’m very hard to surprise.” Even though she knew it was going to happen, she says she sobbed like a baby when he took out the ring.

Since she had an idea of when they were going to get engaged, Gaelle says she did some “loose but not so loose planning” ahead of time. “I had a Google doc with venues to go look at eventually, once I got the ring on,” she says with a laugh. So shortly after he proposed, Gaelle says they started to look at venues and speak with vendors on her list. Within two weeks, she says they booked the Westbury Manor, a BOLI preferred vendor, for July 8, 2022. And a few weeks after that, all of the bigger vendors were booked. “Within the first, maybe two-three months, I had about 75% of it done.” 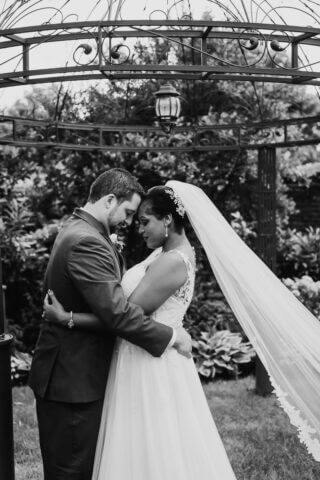 Seeing all of the brides dealing with COVID, she was happy she was able to get all of the vendors she wanted. She says she’s glad she did all of her research ahead of time, because it made booking the vendors they wanted quicker and easier. “It was very smart of me, because I spent most of the year just not worrying about anything because I had most of it planned.”

Gaelle says even though she booked her vendors early on, she relied on the BOLI Facebook group to read reviews of brides who used them! She was happy to read about people’s experiences in real time, as it put her mind at ease knowing she was going to be in good hands.

MORE: 6 Reasons Why You Should Hire a Wedding Planner

Gaelle says that every vendor she picked was wonderful. “I did not have to worry about anything the day of because I knew my vendors would do their job.” One of the standout vendors of the night? Her MC, Carlton, with After Hours. Choosing a DJ was a big decision for both Gaelle and Daniel, as they both love to dance and are particular about their playlists. It was also important to Gaelle that her DJ play Haitian music, as her family is Haitian. She explains that when they first met with After Hours, the head of the company said their MC Carlton was Haitian and spoke Creole. “He was awesome!” says Gaelle. “He might have had more fun than anybody else at the wedding! It felt like a friend was MCing our wedding.”

Another great vendor? Her photographer Elvira. “She made sure we got all the shots we wanted, even the goofy ones. She was pleasant to work with and made me relax.” 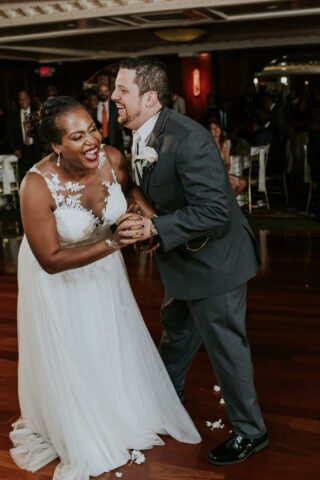 But the real standout of the day? The priest at Sacred Heart Church. While Gaelle and Daniel didn’t intend to have their ceremony at a Catholic church, it was important to Gaelle’s parents. “We weren’t opposed to it, it was more about logistics,” she explains. Father Stephen Brigandi was so easy to work with, Gaelle says. And since it wasn’t originally in their plans, Gaelle was specific with some of her requests, which Father Stephen gladly fulfilled. “He let us have our processional song played by one of our friends; he let us say personal vows (after the church vows) and he let me sit next to Daniel during the ceremony,” she says. Gaelle adds that his homily was the best she’s ever heard, from “not knowing us and our relationship, he still managed to encapsulate what our relationship is in the homily. I don’t know how he did it.”

MORE: 5 Reasons Why You Should Choreograph Your First Dance

Despite one of her bridesmaids getting COVID the day before, and a minor miscommunication with the timeline, their wedding day went off without a hitch. And Gaelle succeeded in not only making her guests happy but in pulling off a prank during their first dance! Gaelle asked her DJ to play the Train song “Play That Song,” a song that Daniel is not a fan of, instead of their agreed upon song of “Wagon Wheel.” “He didn’t realize it at first, and he kind of went with it,” she says. They eventually did get to dance to a special version of “Wagon Wheel” after the prank.

Seems perfect when their sort-of theme was ‘Misadventures.’ “Basically, misadventures mean when things go wrong and in the moment it kind of sucks, but later on it’s funny thinking about it,” says Gaelle. “And later on, you’re kind of happy it happened.” To stick with that theme, each table was named after a misadventure in their relationship and a photo to go with it. “One of them was Maine, because we went to Acadia National Park and we almost got stuck on a mountain at night.” And when they could, they put people at the tables who were actually part of the misadventure! 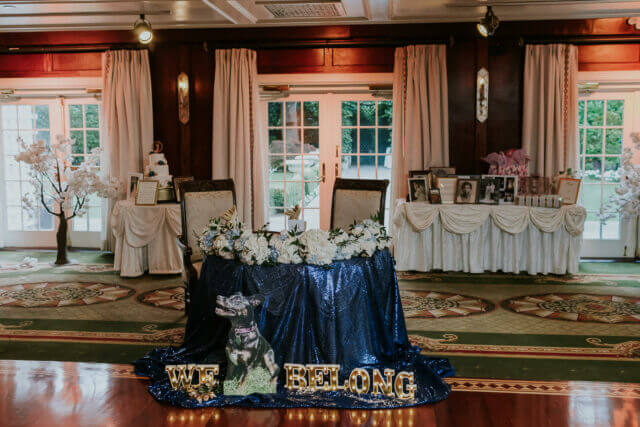 Some other personal touches that Gaelle says really wowed her family and friends? A cardboard cutout of their dog that sat at their sweetheart table, a memorial table to remember those they’ve lost, and their cake which incorporated both families’ backgrounds. “It made some of our family members cry. It was heartwarming to know that all the little things I did to show our families together was appreciated by everyone.”

Speaking of crying, Gaelle says she made Daniel cry with one of her gifts to him – a pocket watch with a picture of his uncle who passed away inside. “I tried to make various people cry at this wedding, and I very much succeeded, and I’m very happy about it.”

Gaelle says she considered herself lucky when it came to wedding planning and the big day. Even though the day itself went fast, she says she and Daniel remember so much from the day, even more than they thought they would. “It was fast, but we remember so many things because we took the time to sit there and appreciate every single moment.” 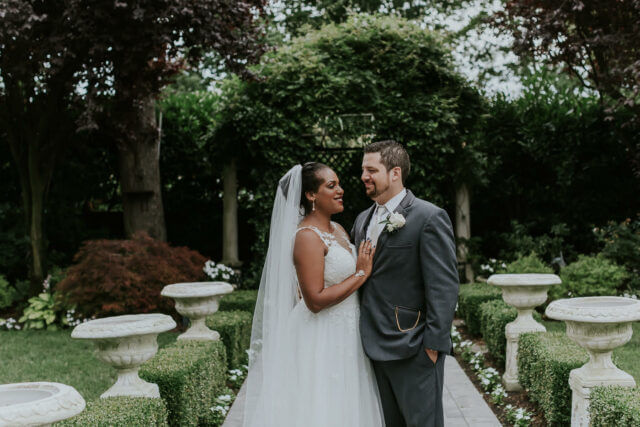 A favorite moment of theirs? Whenever they took the dance floor, it seemed like the two of them were in their own little world, as everyone in the background seemed to fade away for that moment. She was happy she and Daniel got to spend most of the night on the dance floor with their guests.

Do What You Want

As far as advice for other Brides of Long Island, Gaelle says to just trust your vendors. “If you trust them, your day will be fine.” She adds that it’s true when everyone says ‘do what you want.’ “It’s your wedding, if you want to splurge on something, do it!” She explains that anything she splurged on – such as a caricature artist and a trolley – was worth every penny.

And just like other brides who have graduated, Gaelle says to just take in the moment and enjoy your day. “Focus on having a good time with your husband, and friends and family.” 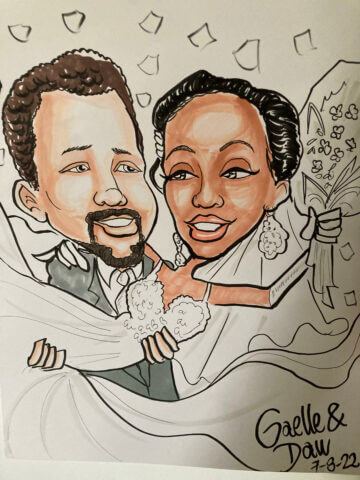