How Do You Address Your Wedding Invitations? Here Are All The Ways

You’re inviting married couples, non-married couples that live together, couples with children – how do you address your wedding invitations? Here are all the ways! 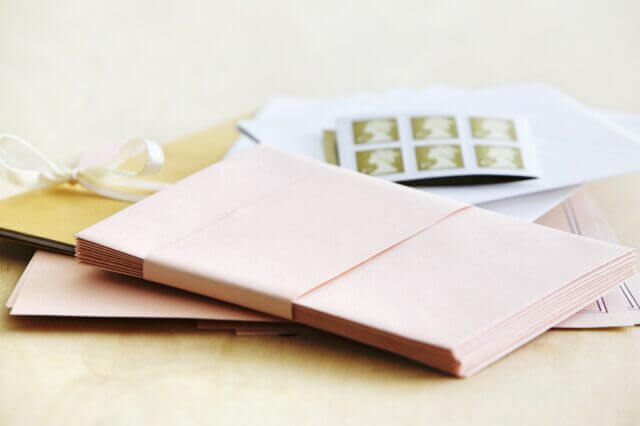 You can’t wait to celebrate your wedding day with friends and family! But as you start putting everything together, you may start to wonder – how do you address your wedding invitations? Here’s the proper etiquette for nearly any guest on your list.

If your invitation is more formal or traditional, heterosexual married couples should be addressed by the husband’s title and name on one line:
Mr. and Mrs. John Smith

If your invitations or more informal or casual, you can list both the wife and husband’s first names:
Mr. and Mrs. John and Jane Smith

If a wife has chosen to keep her maiden name, envelopes should be addressed with the following format:
Mr. John Smith and Ms. Jane Johnson

The same format can be used if a wife has chosen to hyphenate her name:
Mr. John Smith and Ms. Jane Johnson-Smith

For same-sex couples, use one line and list names in alphabetical order by last name:
Mr. James Matthews and Mr. Peter Richards
or
Mrs. Sarah Goldberg and Mrs. Melanie Steele

If you’re unsure how a married coupled would like to be addressed, don’t be afraid to reach out and ask for their preference.

If a husband has a title and a wife does not, use one of the following formats:
Doctor and Mrs. John Smith

If a wife has a title and the husband does not, list the wife’s name first:
Doctor Jane Smith and Mr. John Smith

If both the wife and the husband have the same title, list them together:
The Doctors Smith

For a same-sex couple, list the husband or wife with the title first:
Doctor Claire Jones and Mrs. Brittany Jones

For a same-sex couple where both have titles, use the following formats:
The Doctors Phillips-Green
or
Doctor Sarah Goldberg and Doctor Melanie Steele

Again, if you’re unsure how a couple would like to be addressed, it never hurts to ask!

If you’re inviting all members of a household and your invitations are more casual, you can list the family name:
The Smith Family

Children over the age of 18 get their own invitation, even if they live in the same household.

Typically, the title for a non-binary or gender-fluid guest is Mx:
Mx. Cory Holloway

Mx. can also be used if a guest is trans and Mx is their preference. However, you can choose to use the title that correlates with their preferred pronouns. ALWAYS list the name they identify with – never use a deadname.
Ms. Cory Holloway
or
Mr. Cory Holloway

If you are unsure how a non-binary or trans guest would like to be addressed, reach out and ask them.

If a guest is unmarried, they are addressed by rank, first and last name, and service branch in the following format:
Colonel Steven Brown, U.S. Air Force

If a husband is in the military a wife is not, list in the following format:
Colonel and Mrs. Steven Brown

If a wife is in the military and a husband is not, list in the following format:
Colonel Felicia Brown and Mr. Steven Brown

If both a husband and wife are in the military, list them on separate lines with their title and branch:
Lieutenant Steven Brown, U.S. Army
Colonel Felicia Brown, U.S. Navy

For unmarried couples, list the service member and their branch on one line and their partner on the second:
Colonel Nancy Adams, U.S. Air Force
Mr. Joseph Walters

A divorced male-identifying guest would be addressed as he would if he was single:
Mr. Lawrence McMillan

If a male-identifying guest changed his name or hyphenated it during marriage, reach out and ask how they would now like to be addressed.

If a female-identifying guest has kept her married name, list Ms. (or other professional titles) followed by her first, maiden, and married last name:
Ms. Rebecca Peterman Williams

If a female-identifying guest has resumed use of her maiden name, address as you would if she were single:
Ms. Rebecca Peterman

If your invitations are more traditional, address a widowed woman using her title and her husband’s first and last name:
Mrs. Andrew Crawford

If your invitations are more casual, use a widowed woman’s first and last name:
Mrs. Silvia Crawford

If your guest kept her maiden name during marriage, address her using her own first and last name:
Ms. Amanda Geller

If you’re inviting a guest in a long term relationship, use their partner’s full name. If you’re not sure of their partner’s name, reach out and ask. If you are inviting a guest with a plus one of their choosing and you’re not aware of who they will invite, indicate it on their RSVP card (“Mr. Brian Martin and Guest”) and address their invitation only to the guest (“Mr. Brian Martin”)