Mrs. September: Wedding In A Week? Not a Problem For This BOLI

In Brides of Long Island’s Monthly “Mrs.” series, we profile some of our members’ unforgettable weddings! This month, we talked to BOLI Lauren Papadimas about her experience planning a wedding in a week! 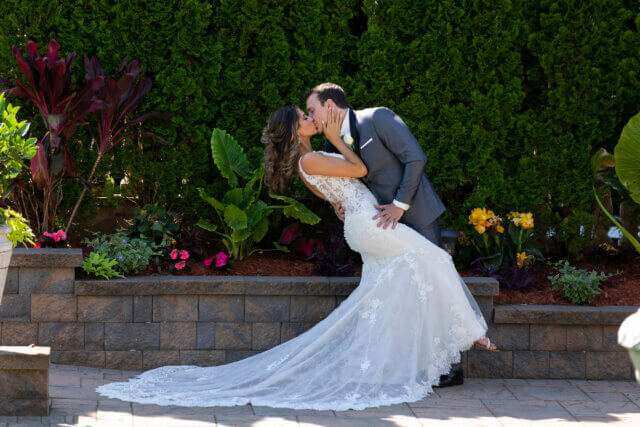 Most brides have over a year to plan their big day. Some have months. But for Lauren Papadimas, she had just one week! Granted, she was a finalist in a radio contest so she had a little time to prepare, but everything from the dress and flowers to photographer and DJ were planned in one week’s time! Here is how she did it.

The Perfect Year for a Wedding…..
Lauren and Billy got engaged in August 2018 – at an escape room! Billy planned what Lauren thought was a girls day, but Billy was behind one of the doors. “I found this clue that basically said, ‘behind this door, the good life awaits you,’” says Lauren. “And I opened the door, and he’s sitting there with pictures of us all around.” So, to say that Lauren and Billy are unconventional would be an understatement. They thought it would be cool to get married in 2020, which would give them just about two years to plan everything. However, by August of 2019, they had everything booked and planned – ready for their wedding on Sept. 5, 2020. In April of 2020, they decided to postpone due to COVID-19 and the restrictions. By February 2021, their venue called to say they could no longer host their wedding. “So, they canceled the wedding on us.” 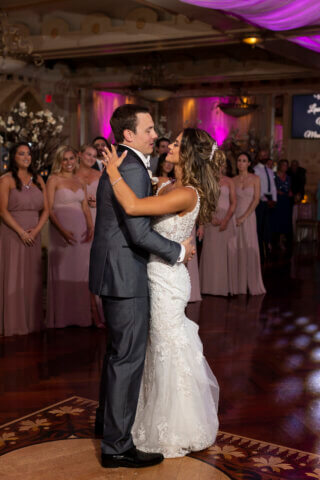 What Did They Have to Lose?
After canceling all of their vendors and trying to figure out if they should elope, have a destination wedding, or head to city hall, Lauren’s mom suggested she enter KJoy’s Wedding in a Week contest. Lauren and Billy were among seven finalists in the contest. Before agreeing to be finalists, they had to agree to get married one week from the date that they would win.

“So we were like, you know what? Let’s just try it. What do we have to lose?”

After planning their wedding three times, they figured why not? They rallied everyone they knew to vote for them. All of that voting paid off, because they won! 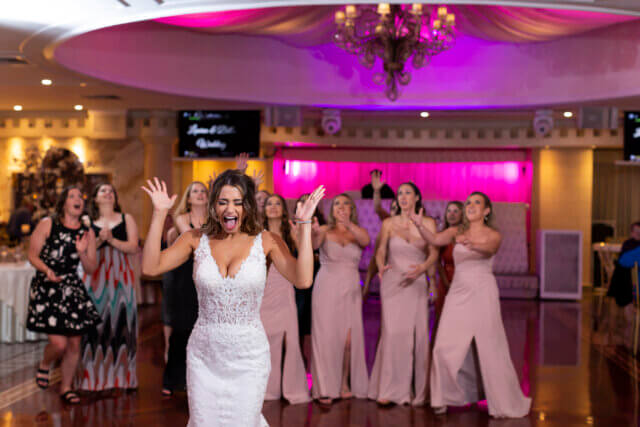 Let the Planning Begin
On May 20, they immediately got to planning their wedding. The first appointment was to pick her dress at The Bridal Salon of Dix Hills. Two days later, she was fitted. A day before her wedding, she picked it up and “it fit like a glove, it was perfect.”

The entire week leading up to their May 27, 2021 wedding was filled with appointment after appointment and getting everything set up. “It helped that we already knew what we wanted our flowers to look like and what pictures we wanted,” says Lauren.

“If we were starting from scratch, that would have been really, really crazy.”

Lauren admits that when she planned her wedding originally, she was very indecisive. But this time around, with such little time to really think, she made decisions and stuck with them without second guessing herself. “My whole mindset just kind of changed,” she says. “I actually preferred it like that.” 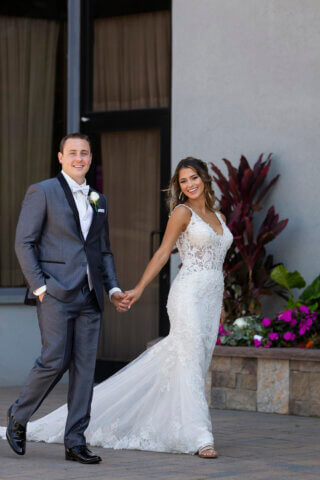 Everything Was To the Nine
Lauren will be the first to tell you she was initially skeptical of how the wedding would turn out. “You would think it might just be this plain, simple [wedding] and not anything big or extravagant,” says Lauren. But it was anything but. “They really did such a nice job, everything was to the nine and beautiful. It was an incredible day.”

And to the nine it was! The venue was the Sand Castle in Franklin Square. And luckily all of the COVID restrictions were lifted the week before, so Lauren ended up having her dream wedding with 160 guests! Yes, she was able to make tons of phone calls to get all of her guests to attend the wedding.

All of the Vendors Were Great to Work With
“I have nothing but amazing things to say about the vendors,” says Lauren.

All of the vendors were provided by KJoy, with the exception of the groomsmen’s tuxes at Men’s Wearhouse and the bridesmaids’ dresses from the Wedding Plaza in Floral Park, as well as their hair and makeup. Tino did the photography and video. Lauren says she was nervous because she didn’t know them before they won the contest. But she says, Tino and his wife went above and beyond to make their day amazing. She says they stayed longer than they needed to, were very detail oriented, and the pictures were incredible. 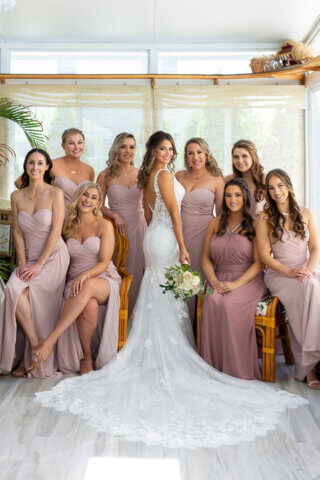 And the dance floor was packed the whole night thanks to Genesis Events – also a BOLI preferred vendor. At one point, Lauren says the DJ told everyone to party like it was 2019 – and everyone did. “I’ve never jumped that much in my life,” says Lauren. She says because people hadn’t been to a wedding in so long, the energy was wild on the dance floor and Genesis was able to match it and increase it. 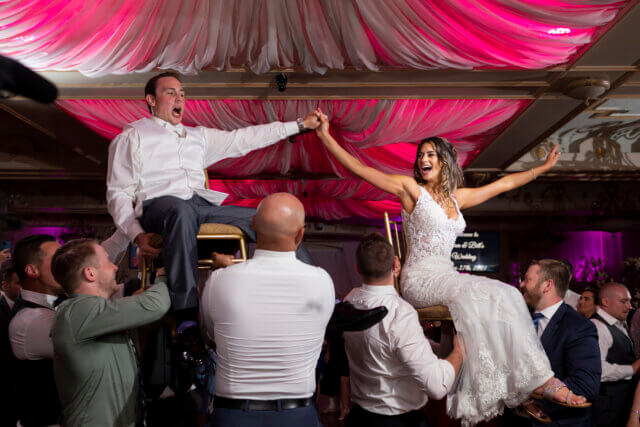 Honeymoon in Greece
KJoy also sent Lauren and Billy on a honeymoon to Greece. The owners of the Sand Castle are Greek, and they own a hotel in Greece. And it turns out, that is the one thing that didn’t change from their original plans! “We always wanted to go to Greece,” says Lauren. “That was originally our plan, and it happened to work out that it was the same hotel stay that we were originally going to do!” They spent a week in Crete, and then another week bouncing around Santorini, Mykonos and Athens. 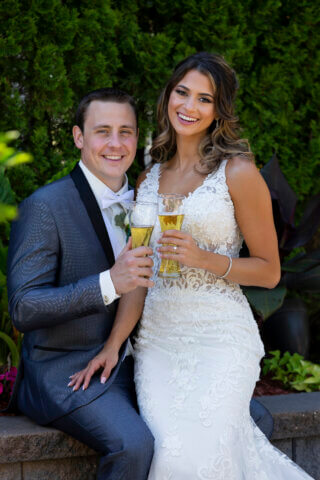 Don’t Sweat the Small Stuff
She knows it’s cliché, but it’s true. Lauren says because they only had a week to plan, they had to make a decision and be happy with that decision. She adds that you shouldn’t worry about what anybody else thinks. “Just go there thinking it’s going to be this beautiful day with whoever you’re marrying. And think about how everyone is going to have an awesome time,” says Lauren. “Don’t worry about the fluff stuff!” 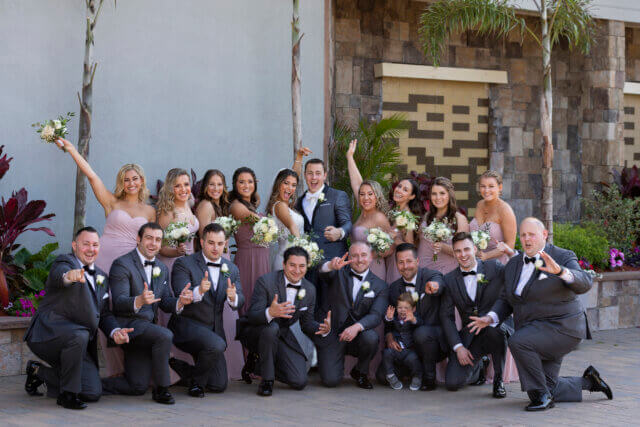 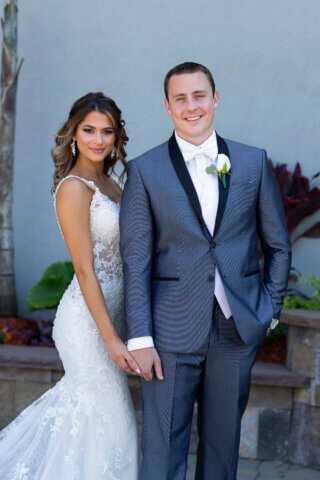 MORE: Don’t Sweat the Small Stuff and Other Wedding Mishaps